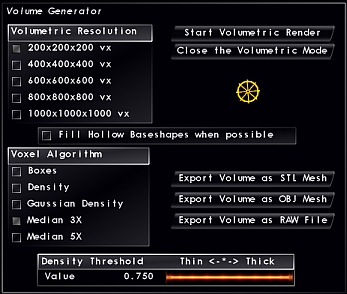 Important Notice:
This is an outdated Incendia EX tutorial.
Use the Simple Mesh Generation Tutorial for Incendia Next.

Most Incendia baseshapes are thin (infinitely thin) shells that has no filled volume.
This approach is good for standar rendering, but it becomes a problem on the volumetric rendering mostly because the resulting meshes becomes very large due to hidden details. For example, the sphere baseshape is in reality a bubble, not a solid sphere and when it is rendered by the standard method, theres no problem since it's opaque.
In the volumetric method, the sphere now is a bubble and has a wall, so the triangle counts not only include the surface of the sphere, but also its inner wall. Also, in many fractal types, many segments will fall inside of the sphere and while that is not visible on the standard render, it will cause the generation of a large number of unseen structures on the volumetric renders, that increases the overhal triangle counts.
To fix that, this options turns the hollow baseshapes into a solid structures, so the baseshapes remains as a solid volume instead of a shell and that reduces the final triangle counts.
Here is an example (using the standard renders) of the effect of this option.

This button start the actual volume calculation. In other words, the volumetric matrix begins to be filled with the fractal calculation.

When it is enabled, the fast preview will show an approximation of the volume box.

This button stops the volumetric calculations and turns Incendia back to normal.

Incendia Volumetric uses the Marching cubes algorithm in order to generate the triangle meshes from the volumetric matrix. Since the marching cubes uses a density field, three different algorithms are defined:

While the Density and the Gaussian Density options are the best, in some cases the Boxes option combined with a Laplacian Smooth Algorithm (found in MeshLab) produces the best result.

This slider is for defining how thin or thick the density field will be. Smaller values produces very thin walls and in many cases removes individual voxels. But also, it produces more details. Larger values tend to smooth out the details but also produces more optimal meshes.

Starting on Incendia 1.5, there are three different export formats for the volumetric render.
The Formats are: